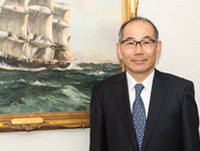 The company was established by Mr. Hachiro Kaifu, former executive vice president of Nissho Iwai, in March 1983 in Tokyo, and commenced business in the areas of shipowning and shipbroking, utilizing our known expertise in these areas.�@As a shipowner, the first newbuildings were two 40,000 deadweight tons handy bulkers, delivered in 1986. Thereafter, the company has been continuously owning from general cargo vessels upto panamax bulkers, some of which were purchased from other quality owners. After the unfortunate, and premature, death of our founder, Mr. Hachiro Kaifu, in June 1994, Mr. Keishi Kaifu, his younger son, left Mitsui O.S.K. Lines, where he held senior positions in the liner and bulk shipping departments, to take up the position of representative director, to lead the company, and continue the traditions started by his father.
The company has excellent business relationships with charterers in its role as an independent shipowner, and at the same time, it has very close relationships with owners and operators in both domestic and overseas markets. Reflecting on the above, the company will continue to move forward, expanding its own fleet by utilizing its established broad network across the world.